FALL 2018
Users can build relationships from different countries through similar interests and the exchange of badges
Penship Press Release
What?
From different time zones to different cultures, Penship gives people the connection to communicate with one another and learn about the things people aren’t usually used to. Penship offers the ability to connect through similar interests and the exchange of badges from different countries and people.
Who?
In the past, pen pals have always interacted with one another through postcards or letters, but with Penship, it makes communication between pen pals an easier and fun experience to meet new people while still retaining the intimacy from receiving a letter.
My Role
Design
Prototype
Test
Tools
Illustrator
InVision
Deliverable
High-Fidelity Prototype
Process
Prototype
Test
Reflect

The persona I created is named Carmine Meadow. She is a full-time college student in the nursing program who enjoys socializing. Meeting people and learning more about the world is a part of her goals. Not only that but she wants to learn about people's different cultures or backgrounds. She is frustrated that it is hard to meet different individuals because she doesn't have easy access to traveling the world. However, with the PenShip app, it allows her to talk to people from different countries while making friends at the same time. Carmine enjoys making friends wherever she goes, and PenShip gives the convenience of allowing her to talk to people that have similar interests. 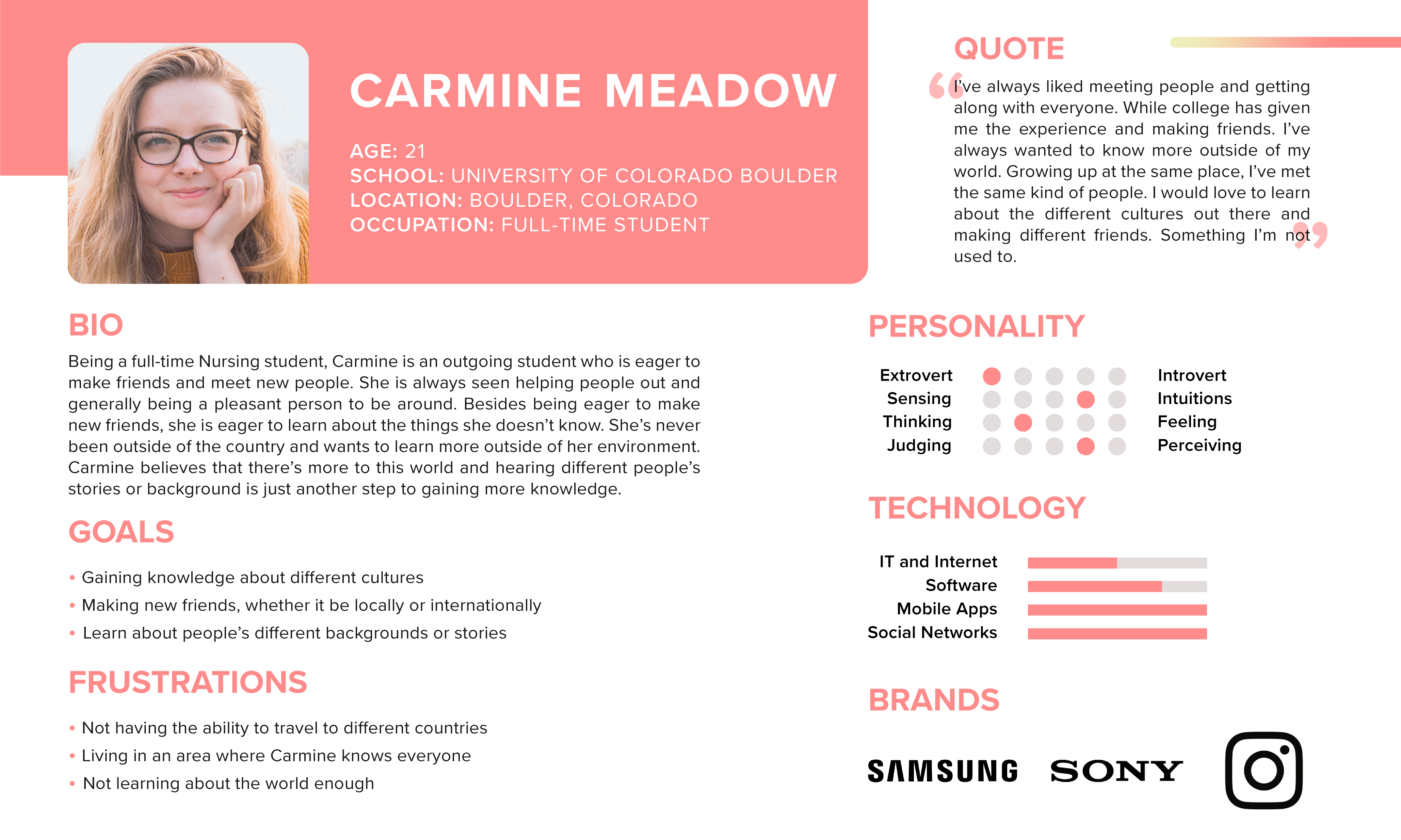 The High Fidelity designs show what the app looks like with different features to look through. Each screen shows what it would look like if you accessed the menu screen, the letter screen, the letterbox screen, customization screen, and the Badge Book screen. The high fidelity designs also include what the users would see when they open the app for the first time and the sign-up process.

Using the InVision prototyping platform, my prototype showed how to sign up for the app, create the user profile, match with a penpal, write/ translate letters, and customize badges. 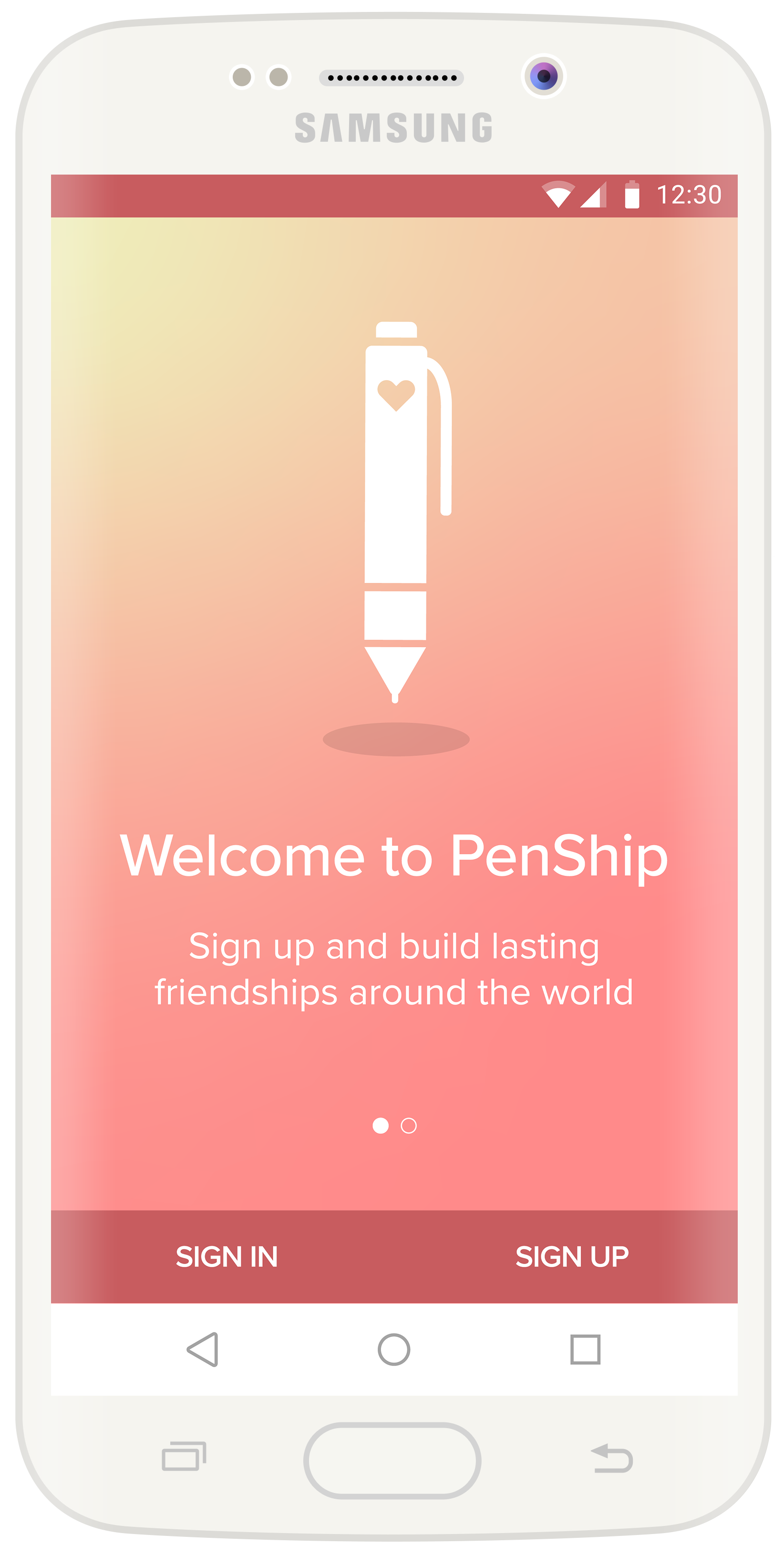 These screens showcase what the app, PenShip, would look like if it were to be on a Nexus 7 tablet screen. These screens show the customization screens for the badge and letter as well as a profile view on the tablet. 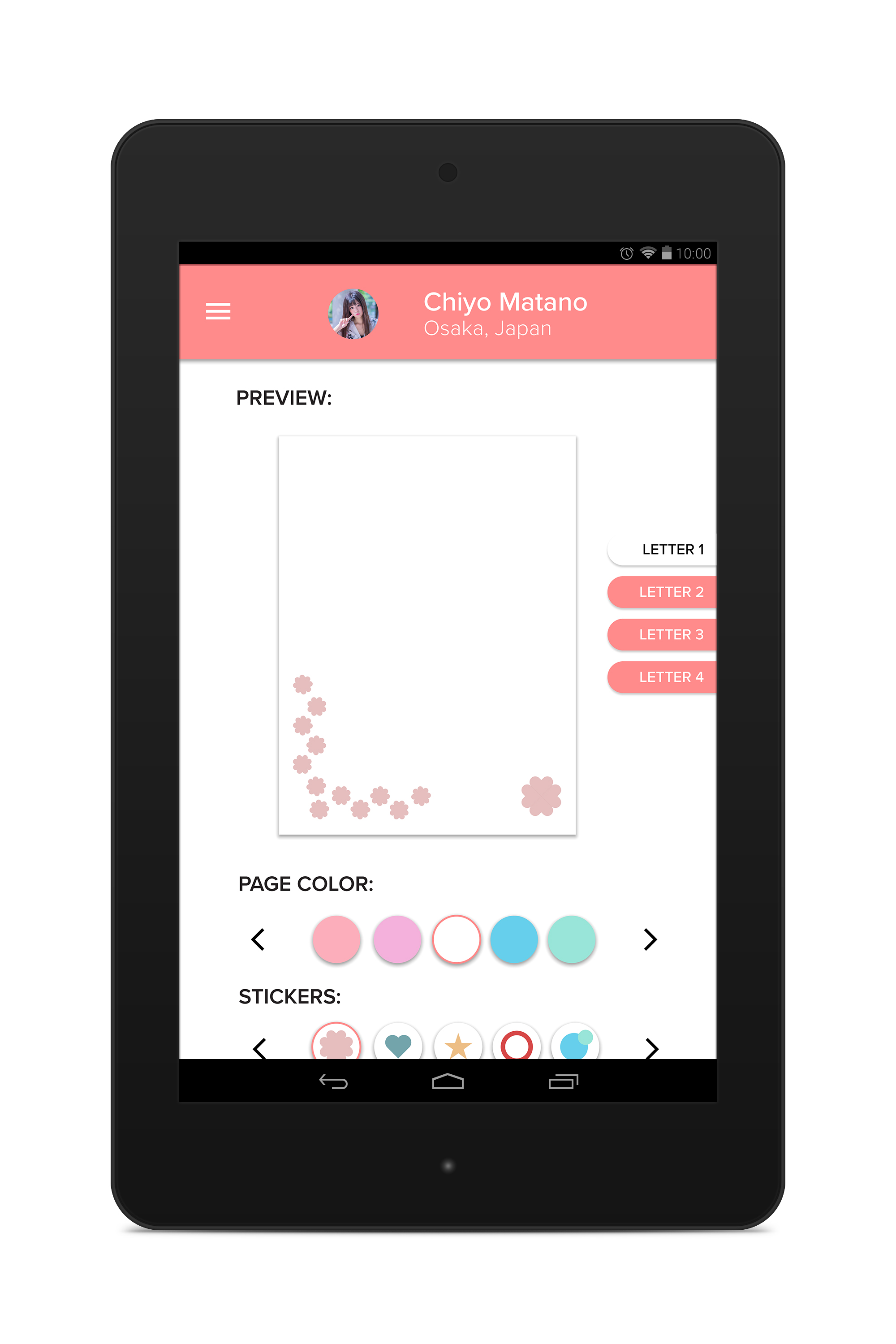 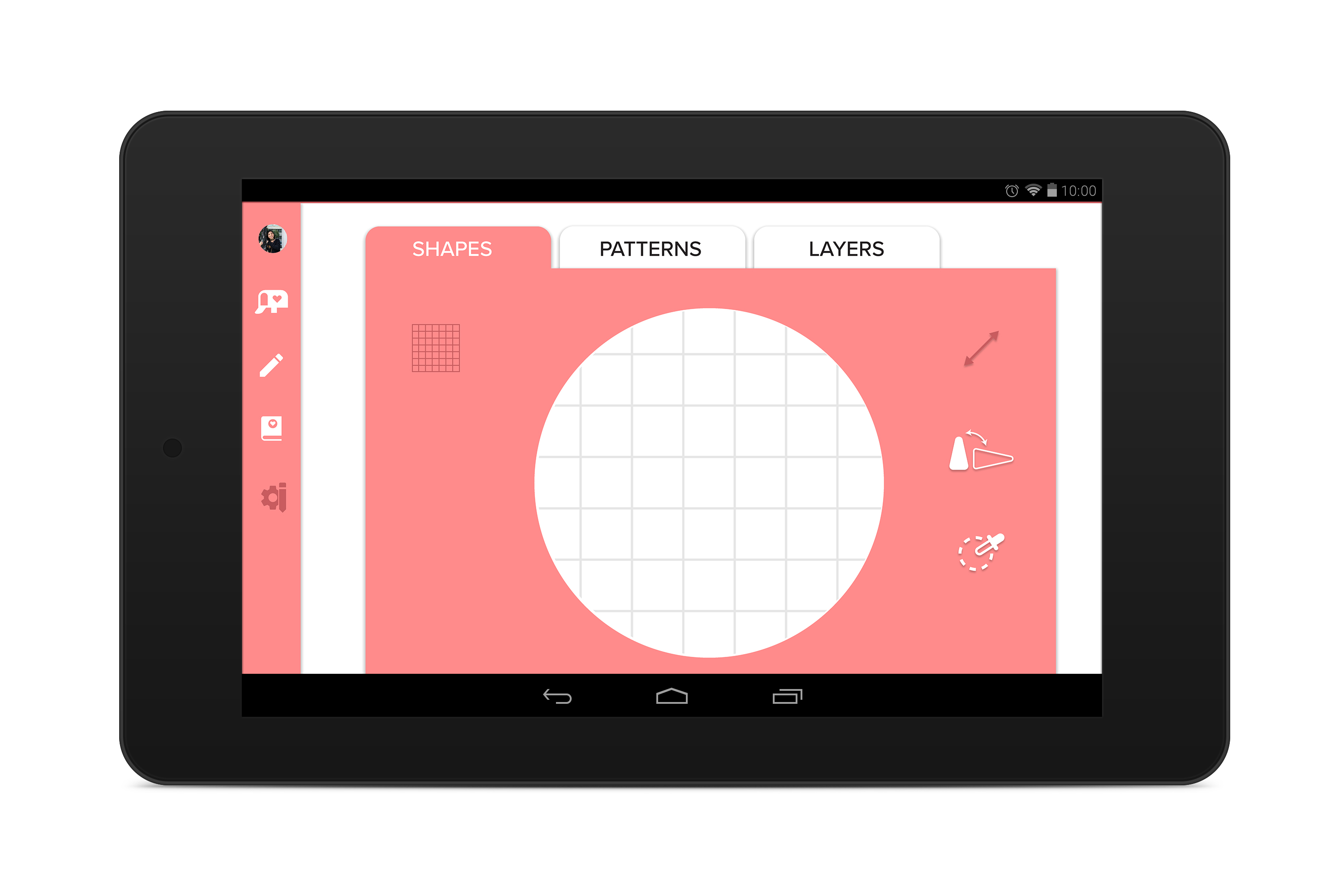 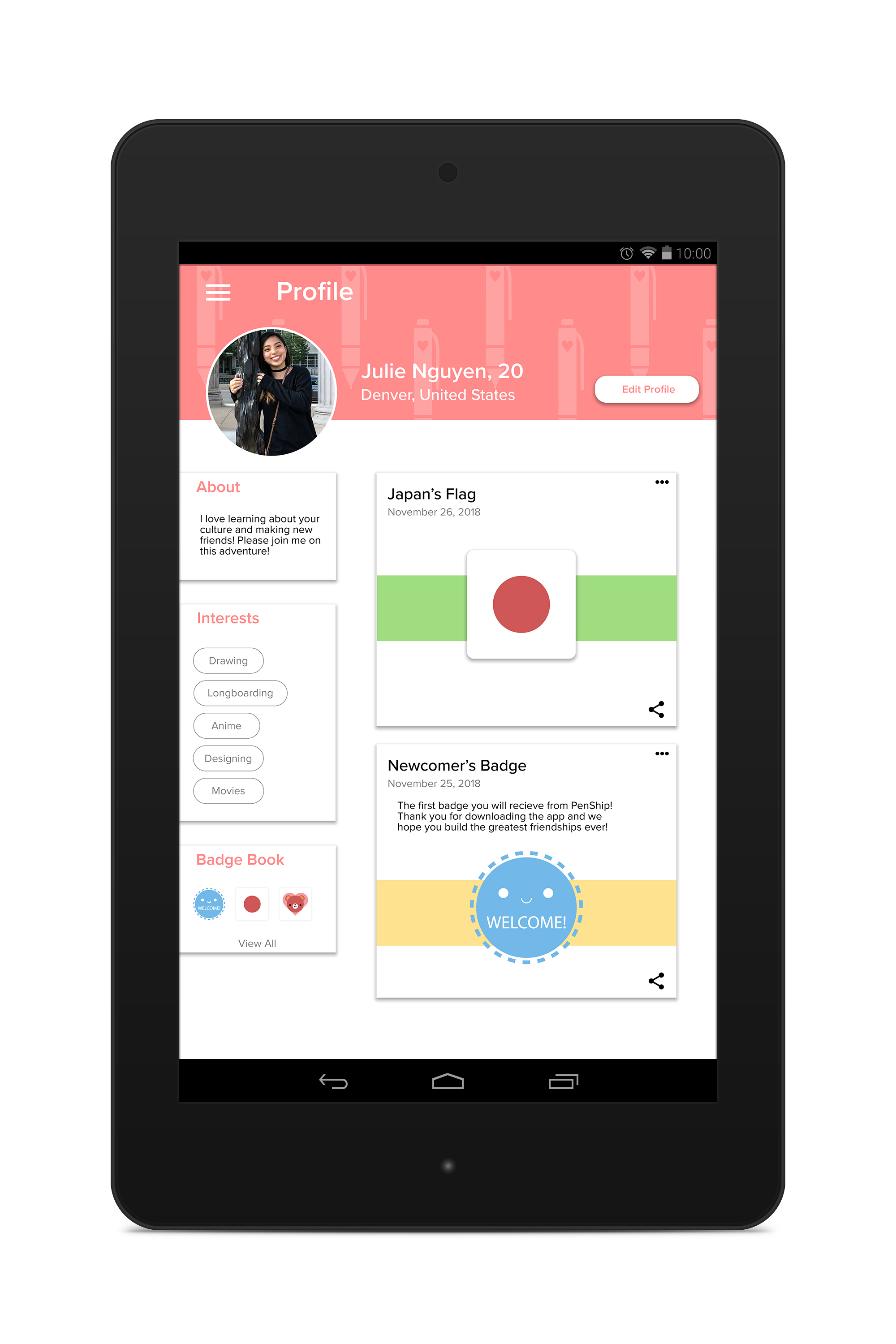 Most of the PenShip participants found that PenShip was a cohesive application that had a friendly and nice tone. There were 4 key takeaways, I got from the usability research which was the task completion rates, the average time on each task, errors made during the testing session, and recommendations that were made from the participants. Despite having a 100% task completion as a result from the testing sessions, task 3 and task 7 had issues of participants saying that they completed the task, but the recorded sessions proved otherwise. Task 3 (Translate Chiyo's Letter) had the longest time spent out of all the tasks due to the translation button not being as obvious enough for 3 of the participants. Users spent, on average, 65.83 seconds on the task. With the task completion and average time on a task in mind, errors occurred in task 3.

The developer of PenShip conducted an online usability test using the testing software, that required users to download their program to test a prototype. The program captured the audio and screen recording of the participants as they go through the test. The developer was not present during the testing process but did have access to the testing session's data. The PenShip session recorded each participant’s navigational choices, task completion rates, comments, overall satisfaction ratings, and feedback

What did I find most challenging about this project?
Looking back at the project, the most challenging thing would be coming up with a high fidelity design without going through the user journey flow and low fidelity process beforehand. I found that without doing the two steps beforehand, it makes designing harder. The high-fidelity designing process became something that took a lot longer than intended that was made up of constantly looking back at the Google Material Guidelines to see if I'm designing correctly and coming up with certain elements on the spot.

What was the most valuable lesson I learned?
The most valuable lesson I learned would have to be time management and sticking to a set schedule in order to complete the task or design. Time managing is a big part of working, especially in the Digital Design realm. Without the ability to manage your time, this issue flows into your work ethic and it can affect the work you give. To me, time is essential to design work.

Thank you for your time!